Cunard has released details of the celebratory voyages the company has planned in 2015 to mark the 175th anniversary of its first ship, Britannia, setting sail in July 1840. Britannia inaugurated the first-ever regularly-scheduled service across the Atlantic and every year since then Cunard ships have crossed and re-crossed the Atlantic, in peace and war, without fail.

Cunard’s flagship Queen Mary 2 will recreate history when she sails from Liverpool on 4 July 2015, following in the wake of Britannia which left the city 175 years earlier to the day. This will also be the first time since January 1968 that a Cunard ship has departed from Liverpool for America.

The 10-night crossing from Liverpool will call at Halifax and Boston just like Britannia, and will conclude in New York on 14 July 2015.

The full voyage, number M511D, begins in Cunard’s homeport of Southampton on 2 July 2015 and the 12-night crossing from Southampton to Liverpool, Halifax (10 July), Boston (12 July) and New York has fares from £2,249 per person.

There has been intense excitement about this voyage since it was initially announced and demand is expected to be high. Whether joining in Southampton or Liverpool, passengers will be taking part in the signature celebration of the company’s 175 years and will themselves become part of Cunard’s illustrious history.

A Salute to Liverpool 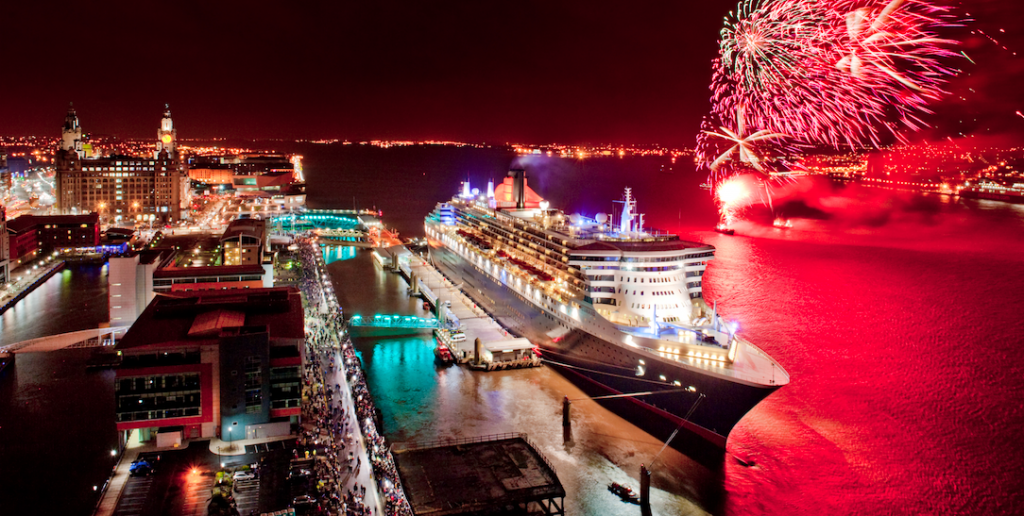 Cunard was founded in the city of Liverpool and the company’s Head Office remained there for 128 years until 1967. Today the magnificent Cunard Building forms one third of the World-Heritage-listed ‘Three Graces’ on the Pier Head. It is fitting, therefore, that 175 years after the inauguration of Cunard’s transatlantic service from Liverpool, the current fleet salutes the company’s ‘spiritual’ home. From 24 to 26 May 2015, Liverpool will play host to the three largest Cunard ships ever built in an historic, news-making, head-turning three-day event.

Queen Mary 2 will arrive in Liverpool on Sunday 24 May and make her first ever overnight stay in the city, berthed in sight of the Cunard Building. The following morning, on Monday 25 May, Queen Elizabeth and Queen Victoria will sail into the city and for a time all three ships of the Cunard fleet will line up on the Mersey in a spectacle that is expected to draw huge crowds. Over a million people saw QE2 sail into Liverpool for the first time in July 1990.

Queen Mary 2 will then take her leave and sail out of Liverpool late morning on Monday 25 May as Queen Elizabeth berths at the landing stage, where she will remain until late that night. Queen Victoria meanwhile will anchor in the Mersey.

Late in the evening of Monday 25 May, Queen Elizabeth will set sail and Queen Victoria will then take the berth and remain there overnight, and for the following day, Tuesday 26 May.

The 25 May three ship event features as a highlight of three very different cruises:

Queen Mary 2: 10-night ‘British Isles – Liverpool Salute’
17 – 27 May 2015. Voyage number M506. Fares from £1,499 per person.
This ‘lap-of-honour’ by the Cunard flagship leaves Southampton and calls at Cobh, Dun Laoghaire, Greenock (where celebrations to recognise the 125 Cunard ships built on the Clyde since 1840 will take place), Oban, Liverpool and St Peter Port before returning to Southampton.

Cunard’s 175th celebrations will start in earnest at its homeport of Southampton on 3 May 2015 when Queen Mary 2, Queen Elizabeth and Queen Victoria will sail into Southampton together and depart later that day in formation. This will be the first time that Queen Mary 2 will have led the fleet out of Southampton in daylight.

On 7 May 2015 it will be exactly 100 years since the Cunard flagship Lusitania was torpedoed while en-route from New York to Liverpool. The ship sank approximately 14 miles off the old Head of Kinsale in Ireland. In all, Cunard lost 22 ships during the First World War, including Carpathia which had rescued all of the survivors of the Titanic.

“Cunard history reads like no other. For so long the heartbeats of Cunard and Britain have been as one and we intend to celebrate this landmark anniversary in grand style. These special voyages have been planned over many months to commemorate key dates in the company’s history with all who wish to be part of Cunard’s special and unique heritage. We look forward to delivering this year of spectacle and celebration to the many people who share the pride we feel in Cunard’s ongoing success on both sides of the Atlantic and beyond.”