Occasionally I am very privileged to be invited to some exclusive events onboard my favourite ships in Southampton, and yesterday was no exception. I had been invited to a Masterclass with Atul Kochhar onboard P&O Azura in his signature restaurant at sea, Sindhu.

I had a bit of a painful start to my day as I arrived at Ocean Terminal. At around 10.15am just as many of the passengers were arriving via taxi for the start of their 14 night Mediterranean cruise. Why was it painful? Well they were getting out of their taxis, the porters were taking care of their cases and they were walking through the doors to Ocean Terminal with passport in hand ready to check in at the top of the escalator, they might as well have kicked me on the way past! I confess not all of them looked happy. You could tell which ones had slept on the wrong side of the bed, which ones had had words with their other halves about leaving for the dock so early – after all, check in for suite passengers and top tier loyalty members doesn’t usually start until 11.30am. But there was a smiley cheerful man, in a P&O fleece, at the bottom of the gangway to sweep them all up, put a smile on their face and send them up the escalator in a better mood. 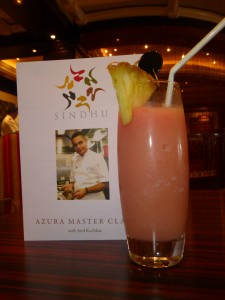 At 10.45am our select little group was ready to embark via the crew gangway. Ooh it was chilly on that dockside. Security staff at the foot of the gangway were wrapped up like they were in the Antarctic. Once onboard we had an hour to kill. We checked out the key areas of Azura. I relished the little warm up on the hot stone beds in the Spa area which were greatly appreciated after checking out the Sanctuary in the biting wind. It did turn into a bit of a GoCruisewithJane tour as I taught my hosts things about Azura that they weren’t aware of, such as the Spa treatment rooms with balconies, the funky art work that appears around the ship such as the stocking legs, shirts in the stairwell, vase of flowers outside the ladies facilities, random coats hanging up etc. If you aren’t aware of what I am talking about you will have to come on a GoCruisewithJane tour of Azura sometime! 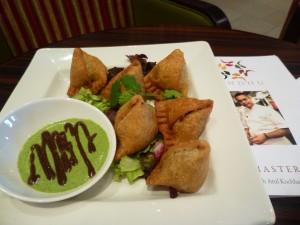 At Noon it was time to head to Sindhu for our Masterclass. It soon became clear that Atul was delayed, and we were informed that he was stuck in traffic and could be sometime. Never mind, a Benares Cocktail eased the wait. It was lovely, and I think the Benares cocktail has another five new fans. We had a lovely time chatting amongst ourselves and it turned into a very social occasion. Several senior officers dropped by to offer P&O apologies but we were well looked after with wine and some hastily prepared nibbles of lamb samosas. Eventually I had to swap to mineral water and cola which was a bit of a shock to the crew, but I’m not usually driving when I am in an Azura bar! Several chefs seemed to be being called in and at one stage I thought one of them was going to stand in for Atul, but all of a sudden, there he was, the man himself Atul Kochhar had appeared from nowhere, quietly and discreetly, and was stood offering his apologies at the side of the table. No need for apologies, we had all had a nice time. 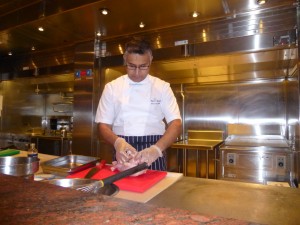 We were seated right infront of the galley cooking area in Sindhu and Atul explained the origin of Indian cooking before he started his cookery demonstration. I have to say that he de robed a chicken like he was taking off a babys babygrow. How do professional chefs make everything look so effortless? Then he showed us how to portion the whole chicken, but the reality of it is, it isn’t going to be anything like that when I attempt it. His knives must be a zillion times sharper than anything in my kitchen draw that’s for sure. Organisation and preparation seems to be the key. Get everything ready, have it all laid out in front of you, and then start cooking. It sounds logical, but I know in my kitchen its a case of hunt through the kitchen cupboard when you are half way through mixing, packets and tins fall out, into half prepared food and then you find you have to nip out and purchase some key ingredient. I will try taking a leaf out of Atuls book in future. It would also be handy to have a team of immaculate chefs on hand all shouting ‘yes chef’ when required. They clearly all knew him so well as they were one step ahead of him most of the time and were swapping bowls, condiments and spices etc before the instruction was raised. Atul mixed all his own sauces and explained everything in a nice simplistic way for non cooks like myself. We were invited to taste everything as he prepared it. We had a full time spoon swapper employed just behind our right shoulder, which was handy! Watching Atul put the final dish together was a treat, he makes it look such an art. Our magic spoon provider is now supplying knives and forks and we all tuck into the amazing plate of food infront of us. I do feel a bit like John Torode and Gregg Wallace at this point as you try to get a bit of everything on your fork and wait for the individual flavours to hit your palate. I confess I did have a bit of a wobbly moment when Atul produced a couple of soft shell crabs and prepared them with passion fruit chutney. Mr Jelly Crab looked not too appetising to start off with, especially with his claws etc, but Atul explained that the whole dish could be eaten, so I decided to trust him and give it a try. It was delicious, so don’t knock it until you try it! 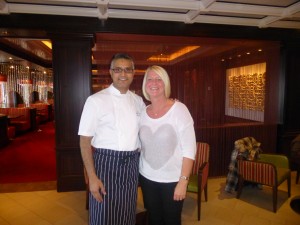 Atul was fabulous. Despite the stress he must have suffered trying to keep his appointment with us he remained calm and never rushed any process of his Master Class. He posed for photos at the end of the Master Class and was happy to answer the many questions that we threw at him. But our day wasn’t over, despite the clock above the gangway ticking we were invited to dine in Sindhu and we were served a full four course meal plus poppadoms and relish to start, and petit fours to finish, not to mention the 3 baskets of bread selections. The presentation in Sindhu just blows you away. Each dish is explained as you are served, and the Indian fusion is just right for me, as Im not one to indulge in a full blown curry from the High street.

Our menu consisted of: 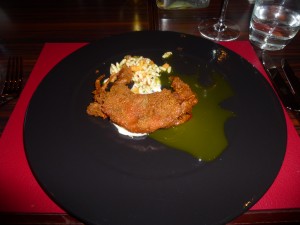 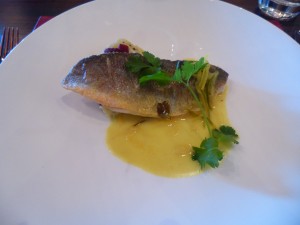 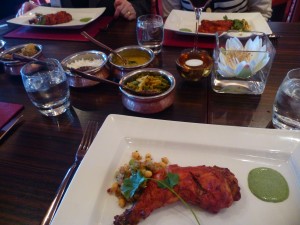 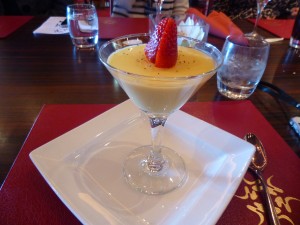 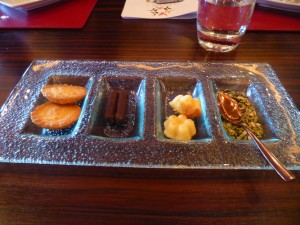 Our day had really overran from the planned timings, and seeing people prepare for Muster Drill before we had even had desert did set some on edge a little. But I was not leaving without my Panna Cotta, and we were all in agreement that it was worth the risk of sailing to the Mediterranean as stowaways without enough clothes to go between us. But with a bit of mix and matching we decided we could get by for a few days until we reached the first port of call. We didn’t have time for coffee, our escort quite rightly pulled rank on us and said it was time to 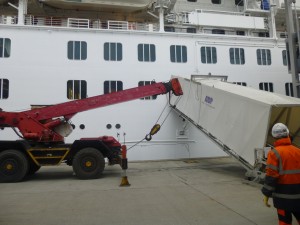 disembark. Before we left we were all presented with a signed copy of Atuls Curries of the World. I said my Goodbyes to the lovely Viju who had looked after us all afternoon. I don’t think he was expecting ‘Jane the passenger’ to turn up in his restaurant today! Then six ladies fled Sindhu just as Cinderella had done at the stroke of midnight, except we weren’t running for a Pumpkin Coach, we were running for a Gangway! And it was a very close run thing. The shops were already open onboard, the Atrium was buzzing, passengers were starting their holiday, and I wasn’t one of them! Just as we ran down the crew gangway the crane was moving into position to lift the gangway from the side of the ship. Close call!! The ladies in the crew pass office will be pleased to see us!! I could have hung around and waited for Azura to sail, but why torture myself. I had enough of that 2 two days earlier when I stood in the sunshine and waved her off on her two night party cruise. There is only one way to watch a ship sail and that’s from onboard! 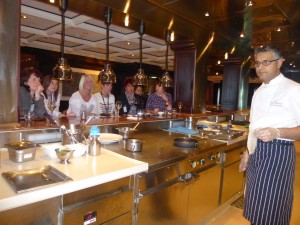 There are several Food and Wine themed cruises planned throughout 2013 & 2014 where MasterClasses such as this take place as well as themed shore excursions, special dinners etc. MasterClass with Atul was £75, and he was also hosting a special dining event at £50 per person, including wines, but that particular event was so popular that it was fully booked within the first 30 minutes of passengers embarking, so you have to be quick if you want to take advantage of these events. 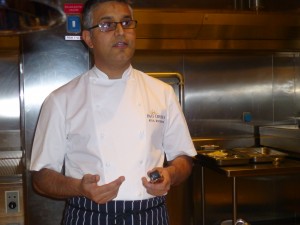 Dubbed the ‘Master of Spices’, at 31 Atul Kochhar became the first Indian chef to win a Michelin star. Born in Jamshedpur, north east India, Atul trained and worked at the Oberoi Hotel in New Delhi before moving to England. In 1994, he assisted in the opening of ‘Tamarind’ in London and it was here that he achieved his first Michelin star in 2001. In 2003 Atul opened his first restaurant, ‘Benares’, named after the ancient holy city in northern India. In 2007, this restaurant also won a coveted Michelin star.

Since opening his flagship restaurant, Atul has expanded his British empire with a further two; ‘Vatika’ in Hampshire and ‘Ananda’ in Dublin. He is also a familiar face on our television screens, first achieving celebrity status competing against a host of other renowned chefs on the successful series ‘The Great British Menu’. Today, he makes regular appearances on TV’s ‘Saturday Kitchen’ and ‘Market Kitchen’.

Using locally sourced and seasonal ingredients, Atul has developed a unique style of cooking. “I practiced what I learnt in India here and then I learnt a lot more here and mixed the two. Some people call it British Indian food, some people call it Indian fusion”. Sindhu celebrates both Britain’s love affair with Indian food and P&O Cruises long standing affiliation with India, bringing you contemporary Indian cuisine with a subtle British twist.