I woke up with a headache today. Even getting a glass of water and some medication was too much of an effort. I decided to roll back over and sleep and when I woke up again it was almost 10.00am. shock horror! A lay in on holiday!! Mr C was up and on the balcony but he hadn’t ordered any breakfast so I went without. I had laundry to do, so I nipped down to D deck to attend to that. Then we went for a wander around and ended up at Aqua Bar catching up with Brian. Oh how I laughed when someone turned the Seascreen on full blast and people shot out of their sunloungers! Well they shouldn’t lay around the sea screen pool should they! 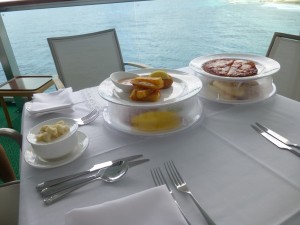 Lunch, I need some lunch, so at noon we went back to the suite to order from the lunch menu. Oh the choice was too much today – chilli, chicken baguette and curly fries, tuna mayo jacket potato, pizza, crab fish cakes – so we ordered all of it! Deepak was obviously on a break because it was a different Butler that turned up and he looked bemused by the large order. He was looking around as if to say how many of you live in here? He didn’t look non too jolly for a Butler full stop. Life looked a tad serious for me. Maybe he was just a bit fed up that he wasn’t ashore with his fellow Butlers.  Lunch was rather yummy and I had just the Chilli with a nice glass of chilled white wine from the fridge. Some of you might guess what happened next? Yes, that big bed put out an emergency call for me and I snuggled up under the duvet for an hour or two. 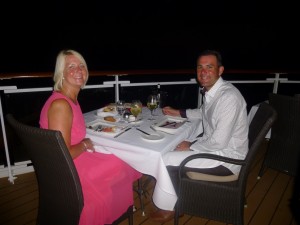 We are dining under the stars this evening in XVII. I have opted for 6.30 dining mainly because you cant physically book a table outside and they are allocated on first come first served basis, so it’s still pot luck that we will get one as they open at 6.00pm.  A few of the tables were already occupied when we arrived but we still had a choice of 3 by the rails. I presume some thought it might get a bit blowy if you weren’t under the shelter of the canopy, plus all tables on the rail are tables for two so if there are more of you than that you don’t have a choice. I asked for a champagne cocktail which immediately translated to  ‘a cocktail’ which aren’t served there but he could fetch for me. It is one thing I have always found a little odd is that XVII doesn’t have a pre dinner bar and offer signature pre dinner drinks etc. A Kir Royale was settled on and I requested that they give us time to enjoy our drinks as we were in no rush. No, suddenly we had menus, breads, wine menu etc. Even a comment card! Could he bring the amuse bouche?? No!!!! We were chilling. The message got through eventually. I wanted to enjoy the sunset and just chill. It was a lovely sunset, so we were very lucky, just off the starboard aft. Its is weird how quickly it goes from daylight, dusk, to night time once the sun has gone down, and the whole atmosphere changes. I could sort of see why people choose to sit under the canopy for the lighting, but I wasn’t complaining. It was so lovely and warm and I didn’t reach for my wrap once. I cannot fault the food. It was superb. I had the duo of oak smoked salmon, the salt marsh lamb and the crepes. The little cup of tomato soup was just delicious and the mango drink thingy with compliments of the 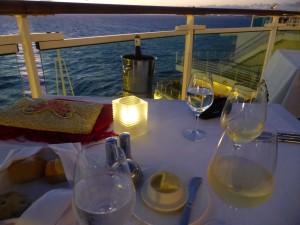 chef was yummy. We rounded it off with coffee and brandy and I sneaked in a couple of Florentines, but really my belly was saying no more! It was a lovely, lovely evening. It was warm and balmy with a very slight breeze just to keep you cool. It might of helped that it was a deck party night so maybe the Commodore was going just a tad slower for the comfort of all. I can highly recommend a meal in XVII. I have been several times and have never been disappointed. Some say the cover charge is a little on the high side, but I personally enjoyed my dining experience, so feel it was worth it. Somehow we waddled out of there some 3 hours after arrival, and I will be honest and say I needed my bed. I couldn’t face a deck party, and wanted to just sit somewhere cool and watch the world go by. We popped our head in Manhattan to see a bit of Annie Lennox tribute. I have seen her several times before and she looked a bit cabaret this time rather than Annie look a likey, but we agreed to come back and see the second show later.

We went along to Glass House, found my comfy sofa, loosened the belt on my dress and chilled. A small can of cola slipped down nicely and then I could sip on my ice cold pellar and enjoy.

Lynn arrived from dinner looking rather squiffy lol thanks to a bottle of red wine with dinner plus some of the non hand shaken tableside cocktails in Blue pre dinner lol. We chatted some more before slowly strolling along to Manhattan for the Annie Lenox tribute. Malabar was packed again and Changez were entertaining. Manhattan was empty, bar stools were available. What ever was going on? Sat at the bar and ordered drinks just as someone announced that the DJ would be down from the deck party soon to continue the party inside. No mention of Annie Lenox. So I asked the waiter. Oh yes madam she was on at 10.30 instead of 11.30 this evening! Thats that then. Maybe I should read the paper or maybe P&O could be a little more consistent – yes, lets blame P&O lol.  I left Mr C to enjoy his drink and I went off to bed. I guess he found someone to talk to as he was gone quite a while. When he did arrive he wasn’t quiet. All the lights had to go on, then he had a slice of chocolate birthday cake, then a potter around the bathrooms and of course once in bed he needed the news on to catch up on world affairs. Men!

I love waking up in the sunshine with the occasional beach passing by. We made it upto XVII intime for breakfast outside on the terrace. I had the honey drizzled melon and I tried the eggy bread and crispy bacon but wasn’t keen. Toast was yummy because it was warm. Mr C had fresh squeezed orange juice, strawberry smoothie, full English breakfast  and two racks of toast! We had a little potter about after breakfast which included a stroll around deck 8 fwd. Had a good nosey at Mein Scheiff which is berthed infront of us and then ventured back through Glass House for a natter with Al.  After that? Well I am just chilling on the balcony with a chilled galss of Veurve! Why? Because its Sunday morning and I can!!! Mr C has seized the opportunity to climb back in bed and watch the news. What is that mans obsession with the news? 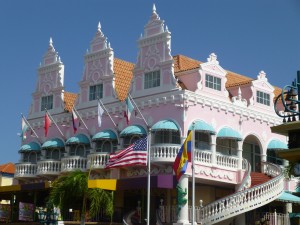 We eventually managed to muster the energy to take a stroll ashore.  Its a shame it is a Sunday, bad timing P&O, as the majority of the shops were shut and so were many of the bars. Those that were open were doing a roaring trade. Iguana Joes was closed but Mojitos next door was open so we sat in there and chilled. Well if you can chill in this heat. The drinks were good and the Mojitos were amazing, so next time you are there go in and try one. We decided to have a bit of lunch. Nachos and some chicken wings. Never seen nachos like them – bright green, orange and purple! It got very very busy in there so it became time to depart to the tranquillity of the suite. It was so hot on the way back to the ship that we decided a dip in one of Azuras pools might be a good idea. 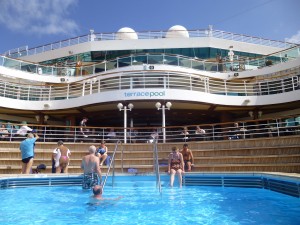 After a quick change we ventured midship to Aqua Pool which was very very hot and sheltered. I needed a bit of a breeze, so then we went forward to Breakers but it was howling an absolute gale round there which was very bizarre. So we ended up aft at the Terrace Pool, sat on the tiered terrace and had a much needed dip in the pool. It was nice out there, still a little too busy for my liking so I retreated down the back stairs to the suite.

After a nice Jacuzzi bath, followed bay a shower to wash my hair, a layering of moisturiser etc I was ready for just a little glass of fizz. Our fridge is fab as it has a never ending supply. I like! 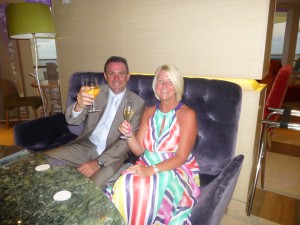 Mr C seemed determined to drag me out early tonight – apparently we are on holiday so we can! Nice chilled glass of Pellar in Glass House and a chat with Al is always a good way to start the evening. It was the Glass House supper club tonight which one day I will get around to partaking in. Very good value for money with 4 courses, wine and coffee included.

7.15pm rendezvous in Planet and it had a bit of a bobble on up there which I have noticed a few times this cruise with having an aft suite. Nothing serious, just a sideways jiggle type movement. We had a very enjoyable couple of pre dinner drinks listening to the duo and singing along where appropriate. And then down to dinner in Peninsular. Our new waiter is starting to niggle me now. I am always either 4th or last to be asked for menu choice or served, little thing but it just niggles me. Why we had to even have a change waiter is beyond me. P&O knew his contract ended half way through our cruise so it makes sense to put him in the other restaurant where the other passengers went home at the same time.  Dinner was ok, jerk chicken was not to my liking so an exchange of plates mid course had to take place and I ended up with meatballs. Baileys bread and butter pudding to finish. 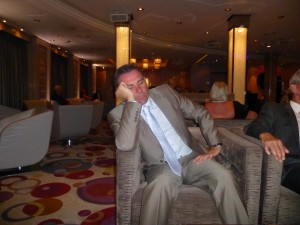 Mr C was falling asleep by the end of the meal, he annoys me! Blue bar for drinkies and he was bedded down in his armchair, eyes closed. A couple of swift kicks didn’t wake him up but it made me feel better. I had decided I wanted to go and see the much talked about Fogwell Flax in Manhattan. He has been on numerous cruises over the years but I could never recall seeing him. He is supposed to be hilarious apparently. I thought it was very predictable and not that funny. I smiled a couple of times but thats about it. Some seemed to find him amusing. But to be fair its not very often comedians make me laugh. And so we were in bed shortly after midnight. I think my rant at Mr C about his sleeping habits fell on deaf ears though!