Cunard Line’s Queen Elizabeth was greeted by hundreds of fans during her inaugural visit to San Francisco on 4th February 2012. Coming from Cabo San Lucas, Mexico, on her 2012 World Cruise, her stop in the City by the Bay marked her first and only maiden call to the U.S. this year. 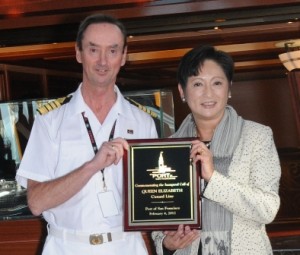 “Today marks a very special visit for Queen Elizabeth,” said Captain Christopher Wells. “This is the Queen’s only U.S. maiden call, and given Cunard’s storied history with San Francisco, we are pleased that now, our entire modern fleet has called on this treasured port.”

The city of San Francisco has long held historical significance for Cunard ships since 1942, when the original Queen Elizabeth visited as part of her war duties, and where she also underwent a refit. Later, in 1978, Queen Elizabeth 2 made her maiden call there, visiting a dozen times more in subsequent years. Five years ago, flagship Queen Mary 2 was enthusiastically received by hundreds who came out to welcome her during her 2007 inaugural visit; and Queen Victoria was also graciously embraced by the city during her 2010 maiden call.

Named by Her Majesty The Queen in Southampton, England, in October 2010, Queen Elizabeth is the second largest Cunarder ever built, after Queen Mary 2.

Cunard’s longtime relationship with Great Britain’s Royal Family is reflected throughout the ship, including a specially-commissioned portrait of Her Majesty The Queen.

“Cunard Line’s ships have long symbolized the special relationship between Britain and the U.S.,” said Kate McNally, communications officer, British Consulate General. “There are also deep ties and history between San Francisco and Cunard, and Queen Elizabeth’s visit marks another milestone in our 70-year rapport.”

“The Port of San Francisco is honored to welcome Queen Elizabeth to our waterfront, as we did for the other Cunard Line ships, Queen Mary 2 in 2007 and Queen Victoria in 2010,” said San Francisco Port Commission President Doreen Woo Ho. “Cunard is renowned for its impeccable service, fine dining and sophisticated adventure, and San Francisco is a world-class destination for cruise guests to enjoy . . . what a perfect combination!”

Continuing its enduring relationship with San Francisco, Cunard is pleased to be the Preferred Cruise Partner of the San Francisco Symphony’s 2012 Black & White Ball this June. As such, Cunard hosted San Francisco Symphony patrons at a private dinner in Queen Elizabeth’s acclaimed restaurant, The Verandah. Guests were treated to a special performance by two Symphony violinists during the evening.

From San Francisco, Queen Elizabeth continues on her 107-day World Cruise and will stop in Hawaii, cross the equator into American Samoa, then cruise the South Pacific to Fiji, New Zealand and Australia. She will then sail the South China Sea to Hong Kong, Vietnam, Malaysia, Thailand and India, before crossing the Arabian Sea to stop in the United Arab Emirates and Egypt before heading back to Southampton, making stops in Greece, Italy, Monaco and Portugal along the way.