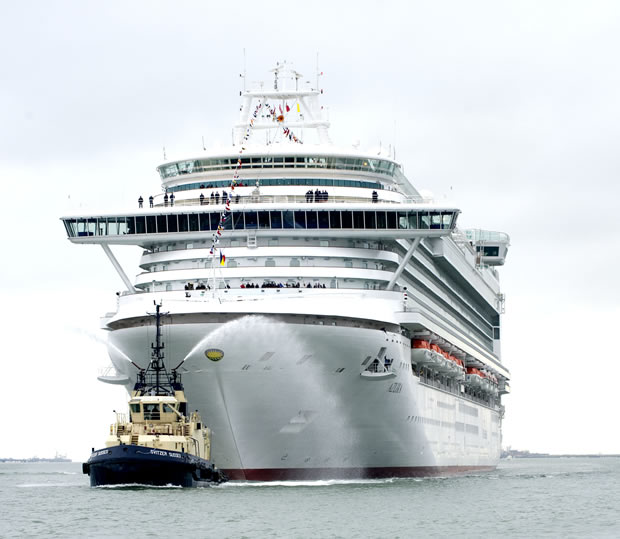 The new, white gleaming hull of P&O Azura arrived into southampton this morning to a wlecome of water cannons and many smaller boats.

So, Southampton has a brand new ship, and one that is registered in Southampton too! Over the next few days many will get the opportunity to get onboard and have a look round and explore this exciting new superliner. Im very much looking forward to my night onboard ….stand by for lots of photos and FaceBook updates. Make sure you become a Fan of the GoCruisewithJane FaceBook page so that you are kept upto date with all the latest cruise news.

I have just been informed of some of the Celebritys that have been invited to the Naming Ceremony on Saturday evening.

Darcey Bussell will officially name the ship on Saturday evening infront of 1200 invited guests. Among those invited guests will be stars from stage and screen including tom Chambers, Camilla Dallerup and Craig Revel Horwood from Strictly Come Dancing. Angela Griffin from Coronation street, Lisa Maxwell from The Bill, Shelly Conn from Mistresses, Emma Crosby from GMTV and comedian Johnny Vegas. Celebrity chef Atul Kochur and Wine Expert Olly smith, will also be onboard.

Im sure it will be a star studded spectacular event. There is also the ‘Voyage into the Blue’ event taking place in the Mayflower Park with big screens showing the live naming ceremony, followed by a firework display.

Princess Cruises documentary to air on ITV this summer