I recently had the opportunity to go onboard Grand Princess in Southampton and take a look at all the changes that had taken place during the recent refit. If like me, you had been fascinated by the daily video blog updates of how the ship was progressing during her refit you will understand why I was keen to see her for myself. Two major changes had taken place during the refit. The removal of the ‘shopping trolley handle’ iconic nightclub that was suspended over the aft of the ship, and a total refurb of the Atrium, including the removal and rebuilding of the stair case that covered 3 decks. Both incredible feats in themselves, but they were only part of the refurbishment. 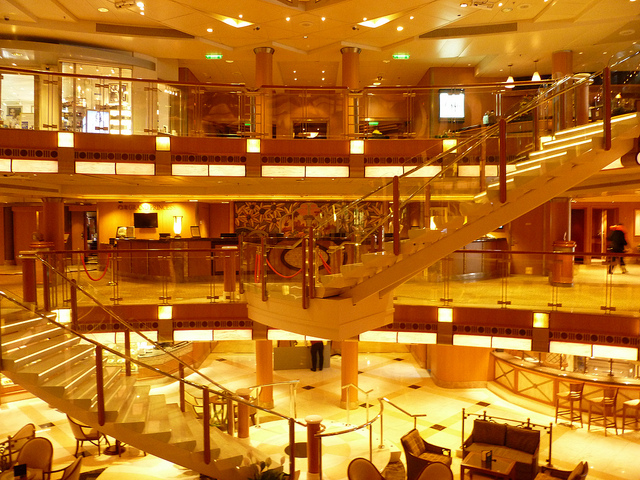 The Piazza Atrium did not disappoint. Obviously the Hub of the ship and by the time I was ready to disembark, later in the afternoon, it was already buzzing.

International Cafe served coffees and teas and a range of savoury and sweet snacks.

Bar Piazza next door offered a relaxing place for a pre dinner drink and people watching.

On the opposite side of the Atrium Alfredo’s Pizzeria was a new addition in the refit and served full pizzas to order.

Next door Vines Wine Bar had an extensive wine list, and was again another new addition in the refit.

One deck up was the usual selection of onboard shops. Beyond the Passenger Services desk was the Casino and beyond that the lower level of the theatre. I later kicked myself for forgetting to check out the new addition of non balcony suites to the starboard side of the Casino.

Up a further deck and more shops, but on the starboard side of the upper atrium was Crooners Lounge and Bar. Very art deco style and feel to it and again a great people watching spot.

Moving forward, Leaves Tea Lounge and Library. A wide selection of books and an impressive choice of teas.

Crown Grill is one of the speciality dining options offered onboard Grand Princess, and I will tell more about that later because that is where I ate lunch. the Upper level of the theatre was beyond Crown Grill and the shore excursion desk, and like all of the ships in this class of design, offered very good site lines to the stage.

Moving back towards midship and aft of Crooners takes you into Explorers Lounge. It did feel a little dark in here, which I guess would be classed as intimate later at night, and as the name suggests had a bit of a jungle theme going on. There was a stage for live music and a dance floor, albeit a fairly small dance floor.

Next door was the WheelHouse Bar, which again struck me as being very dark? Maybe the lights were turned off, lol. Its a sort of a cross between a pub lounge and a country club feel, live music and a small dance floor.

The photo Gallery took up its usual spot that is familiar on these Grand Class ship, along the corridor leading out to the Vista Lounge at the aft. This was very much more of a function room with set seating in rows all facing the stage in the corner. The room is used for daytime lectures and late night cabarets etc

Upto deck 14 the Horizon Court buffet dining area had had a bit of a rethink and the serving area had been opened up a little to try and calm the bottle necking that can happen as people go back into collect desert etc. instead the deserts are now served from glass displays across from the main serving area. 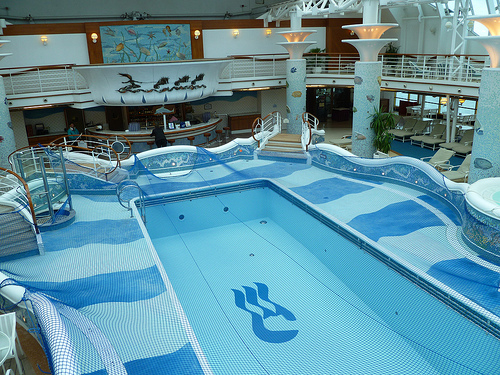 Calypso Reef and Pool has the retractable roof so offers the beuty of both worlds and can be opened up on warmer days, but still offers a covered place to swim and relax when the weather is a little more inclement weather.

Through to the Neptunes Pool which has no roof but does boast the Movies under the Stars above the pool, with the SeaBreeze bar opposite.

Forward of the stairs is the usual Spa and Fitness centre and the Youth and Teens Centres, which is split over three age groups.

Above the Spa is The Sanctuary which is only available to those that purchase a pass, either on a daily basis or for the duration of the cruise. Daily numbers are controlled so that there is enough space and choice of sunloungers etc for all that choose to use it. Light meals and refreshments are served as part of the package and Spa treatments in the Cabanas are extra. The Lap pool is for the exclusive use to those using the Sanctuary. Comfortable sun beds with deep mattresses in both the shade and open deck.

At the aft of deck 15 is Hearts and Minds Wedding Chapel, and the brand new One5 Lounge and Nightclub. A very sophisticated nightclub and lounge and the smell of the soft cream leather reminded me that it was brand new addition to the ship. Some people might have been disappointed to see the travelator and suspended nightclub removed, but this more than makes up for its loss. A really well thought out design, with lots of seating and a lovely bar area, moving around to the slightly elevated dance floor area, with surrounding seating. Outside Rattan sofas and chairs were tucked underneath the overhang from the deck above and offered u interrupted views across the new stern. The horse show shaped decks overlooked the Terrace pool below which was no longer shaded by the monstrosity that hung above it for so long.

I got to see most of the different stateroom grades from Suites down to insides, although I did miss those seven new WS grade Suites on Fiesta deck at 341 sq ft per suite. They are suites but dont have a balcony, so a little bit of a strange addition, given that I would have thought suite passengers would have come to expect their own outside space. There didnt appear to be any major refurb to the staterooms other than the pastel coloured bed covers had gone and had been replaced by the crisp white linen duvets etc.

Lunch was served in the Crown Grill – Premium Seafood and Chop House. We had a set menu but I did take time to look at the evening menu and it was extensive. 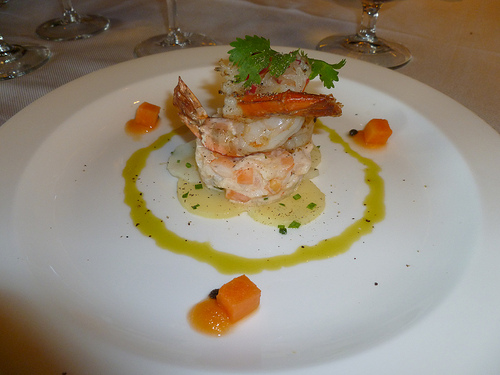 The Grill Salad with Grape-Balsamic Dressing

The wine was free flowing – which was tempting, but I had to drive home so I declined after the first half glass.

By the time we left lunch the Atrium area was buzzing with passengers already settling in for their next cruise. Musicians were playing at the foot of the Atrium. Passengers were settling in with a coffee and a pastry, or a welcome onboard drink in one of the many bars. Passengers were already at the Guest Relations desk keen to sort out their little queries and questions.

All in all, the ship had a great feel to it. Seeing it empty isn’t always the best way to see a ship. A ship is never alive until it is full of passengers that add that extra little buzz to it. Sometimes I did look down at the decking or outside stairs and it reminded me that this was not the brand new ship that she appeared to be in places. She was of course launched as one of the original Grand Class designs in 1998, and now she is bang upto date with her newer sisters in the fleet.

Grand Princess offers a range of cruises out of Southampton during the summer season from 3 to 17 nights before relocating back to Caribbean sailings during the winter months.