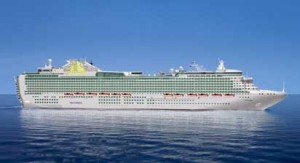 A ceremony marking the keel-laying for the newest superliner for P&O Cruises will be held today at the Monfalcone shipyard of Fincantieri near Trieste, Italy. One of the two largest ships ever built for P&O Cruises and for the British cruise market, the new ship will be named Azura.

P&O Cruises managing director, Nigel Esdale, said: “Evoking images of the ocean and capturing the thrill of cruise travel, the name Azura is very fitting for this most sophisticated of superliners. It is also appropriate for a ship that will be a haven of serenity and the embodiment the choice and service excellence for which P&O Cruises is renowned.”

The keel-laying involved the placement in the dry dock of one section of the ship’s hull. This section is made up of six pre-manufactured blocks, weighs 650 tons and is ready-fitted with piping and other internal structure. The ceremony follows an intensive period of design and development. Fifty sections and several additional interconnecting steel blocks will be used in the construction of Azura and the ship will take to the water for the first time at her float out in summer 2009, before her delivery to P&O Cruises in spring 2010. Azura’s 3,100 passengers will enjoy fifteen public decks, 11 restaurants, five boutiques, four pools, two lounges and over 900 private balconies.