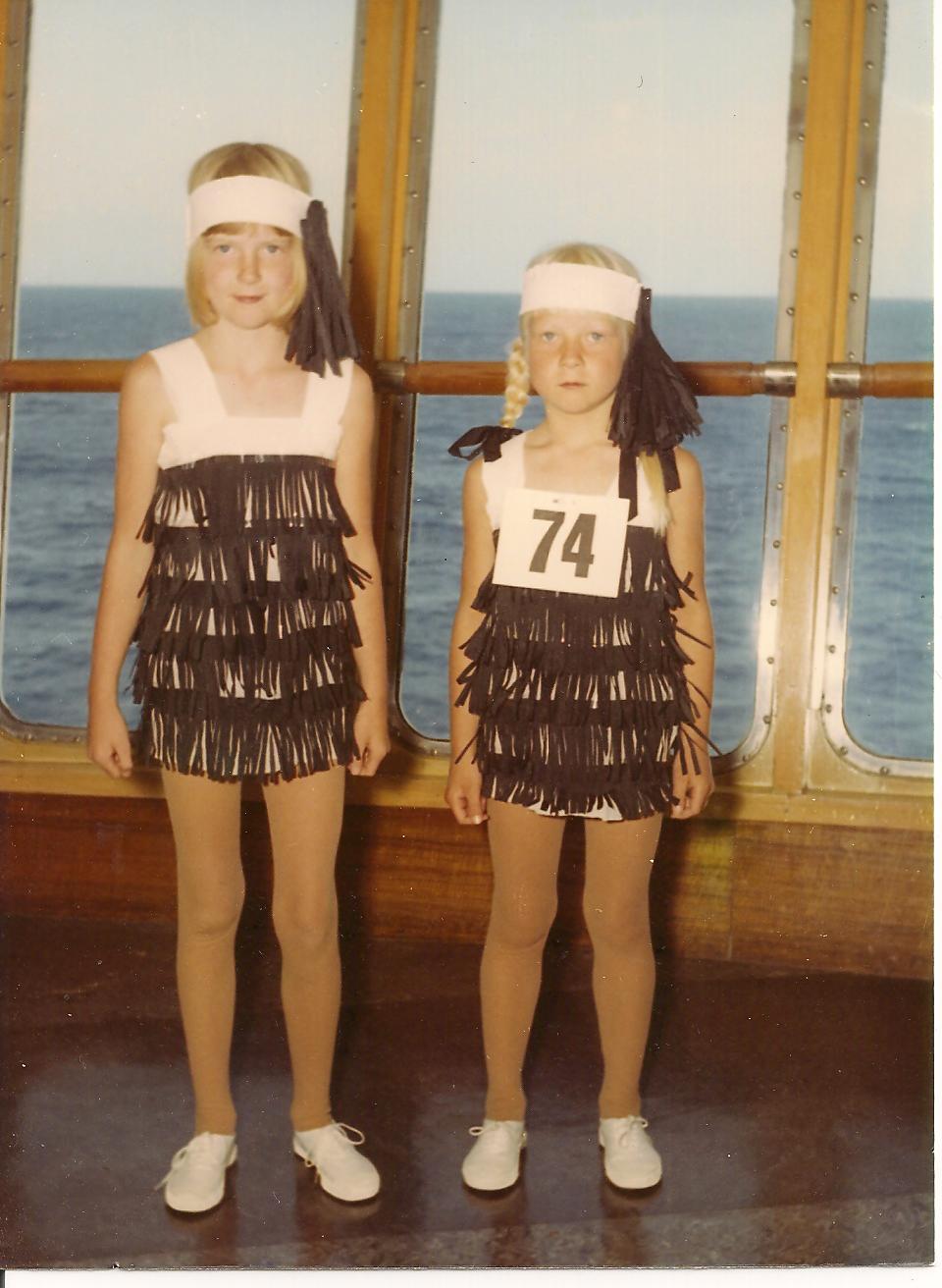 Its time to go back to the 1960’s again to delve into my memories from cruising in the 1960’s. Here I am, entrant No. 74, taking part in the Fancy Dress in 1969 onboard P&O Orcades. Rather cute, even when wearing a paperbag wouldnt you agree?! Taking part in the childrens fancy dress was almost compulsory, but why did the outfits always have to be made out of paper, card and crepe paper? I cant tell you how uncomfortable these outfits were. Stiff white paper card with black crepe paper fringing stook to them to make them look like 1920’s flapper girls outfits. I couldnt sit down for two hours once they were on and there were staples and sticky tape pinching and stabbing at every opportunity. Fancy dress was always a big occassion. On the morning of the fancy dress you would go to the playroom and select your materials to create your costume, and it was an all day occassion to sit and craft your masterpiece. But getting them on and keeping them on was something else!

The adults always had a Fancy Dress night on every cruise, and that really was a big event. If I was really lucky (and reallly, really good during the day) I would be allowed to stay up for evening dinner in the main restaurant and be allowed to go and watch the parade. It wasnt just the odd one or two adults that took part in the fancy dress. A large number of passengers would enter into the spirit of things and go down to dinner in their costumes. There was always a good party atmosphere on Fancy Dress nights, then after dinner the main ballroom or show lounge would be used to parade the participants through and be presented for judging. I can even recall my Dad entering once, which was very out of character for him!

Fancy dress parades were still as big during the 1970’s and 1980’s onboard the Canberra, in either the William Fawcett Room (later the Ocean Lounge) or the Stadium Theatre. I wonder what it was that made them become less popular.  The Stadium Theatre…. what a strange room that was! The floor sloped for one thing and I dont think it was in the direction of the stage either. Of course, it wasnt a purpose built theatre and was originally the outside sports deck, but was later converted to form an improvised show lounge. Either side of the stage there were glass doors, that were really difficult to open when you are only a ‘little person’, that lead to the Crows Nest Bar. They were made even more difficult to open because the doors were situated on a rather narrow step, and I guess the doors were heavier than normal because they used to open onto the outside deck before the theatre was converted. To either side of the Crows Nest doors, there were wooden steps leading to another heavy door, which took you out onto the Observation deck. It was always very very quiet up here, and I always used to think I was so high up, but it is of course nowhere near as high as deck 19 on Azura!  I dont really recall much of the shows, but I guess that would be because I was always in bed. The shows that I can recall were made up of the entertainment team. There was no such thing as a big show cast in those days. They were ‘Social Hosts & Hostesses’ in those days, and in the evenings they had to sing and dance as well.

To the aft of the Stadium was the Bonito club, the first class ballroom, with its glass wall that folded back to open the entire space up to the deck area. Even into the 70’s & 80’s I can  recall the Officers that would line the entrance to the Bonito Club and make them selves available for a quickstep or foxtrot. I can only think of a couple of P&O Officers that I see these days ballroom dancing. Maybe P&O should make it compulsory that they master at least one ballroom dance and mingle with the passengers a little more like they used to!

Outside the Bonito Club, on both port and starboard side, there was the covered area of deck which led through to the Stadium. I always used to think that part of the deck was very posh, and so First class!

I will see what other memories and photos I can produce for you next time, so dont forget to keep checking back.

New Tappy Toes for tots on board P&O Cruises