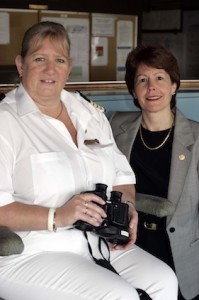 1,200 passenger ship Artemis is on a ‘maiden’ voyage of a different kind, as she set sail yesterday with P&O Cruises first female Captain, Sarah Breton, at the helm

“We are delighted that Sarah Breton has been promoted to the role of Captain on board Artemis. Sarah has worked on board P&O Cruises ships for many years and truly deserves to be Master of Artemis. We wish her every success in her new role.”

Captain Sarah Breton said: “Growing up near the water I always loved boats and the ocean, so it really does fulfil a lifelong ambition of mine to be a Captain with P&O Cruises. It is made even more special to be Captain of the first cruise ship I ever served on, after joining P&O Cruises as third officer back in 1989.”

Captain Breton lives on the Essex Coast and when on leave spends her time in the garden, sailing – whenever the weather permits, and watching Six Nations rugby and Formula One motor racing.

‘Ocean Village’ is making a comeback as CMV Columbus