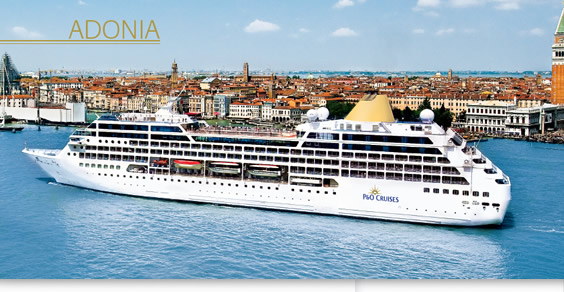 P&O Cruises is bucking the industry trend towards ever larger vessels by introducing a ship to its fleet that will accommodate just 710 passengers and will be able to visit the “off the beaten track” destinations that are inaccessible to some of the bigger ships of today.
The new ship will be named Adonia and will join the fleet in May 2011, to become the smallest of P&O Cruises seven ships. Along with Arcadia she will be an adult only ship.
Built in 2001, more than three-quarters of her 355 well-appointed cabins have balconies. Adonia’s public rooms will have a traditional feel and feature wood panelling, leather armchairs and fine artwork. She will have an extensive library with over 4,000 titles and a grand lounge with an intricately inlaid wooden dance floor and stage to host a range of entertainment, from after dinner speakers to shows by P&O Cruises Headliners Theatre Company.
Adonia will also have the signature P&O Cruises features of a forward Crow’s Nest observation lounge with a nautical feel, and Anderson’s, a centrally located traditional club style lounge bar.
P&O Cruises managing director, Carol Marlow said:
“I am delighted to announce this great news in response to our passengers’ comments to me that some prefer smaller ships. The addition of Adonia will deliver an elegant and welcoming ship with real small ship charm. She will offer a truly intimate and traditional cruise experience, yet with all the comforts you would expect from a modern vessel. With this size of ship our passengers will be able to get to know their fellow cruisers and crew easily as they travel to some of the most intriguing destinations on the map.
“Whilst larger ships have their own appeal, with the spectrum of bars, dining and entertainment choices they can offer, others really enjoy a smaller ship, with its more intimate ambience. No other cruise line offers this breadth of choice specifically for the British cruiser.”
Adonia’s itineraries and fares will be announced in Spring 2010. 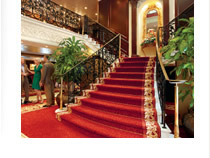 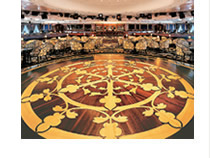 Just as we are all looking forward to our new ship, Azura, joining us, I am delighted to announce another addition to our P&O Cruises fleet – Adonia.

She will join us in May 2011, just after the farewell cruise of Artemis, and will then be our smallest, child-free ship. She is currently operating as Royal Princess. Since we announced the sale of Artemis I have been impressed by the affection shown by passengers and crew alike for that ship, and I have been asked by many passengers on our ships what our plans are for 2011. So I do believe that her loyal following will be delighted by this news.

At 32,000 tonnes, 335 cabins and just 710 passengers Adonia will be considerably smaller than her sisters in the fleet. With an elegant and traditional interior – a delightful library, nautical Crow’s Nest and classic Anderson’s bar (complete with fireplace!), Adonia will exude real small ship charm with a warm and intimate ambience. Yet being built as recently as 2001 she will offer all the modern facilities you would expect from P&O Cruises – a spa, cyb@study, a choice of dining and a high proportion of balcony cabins. Being a smaller vessel she will also be able to travel to some off the beaten track destinations that are not available to the larger ships of today. Indeed she will be a true “pathfinder” ship, akin to Victoria, our similar sized ship which left the fleet in 2003.

Her name may be familiar to you, as the original Adonia (the meaning of which is the female form of Grecian god Adonis), was introduced with Oceana as one of the “White Sisters” in 2003 and she developed quite a following as a widely travelled and child-free ship, before leaving the fleet in 2005.

For all of us at P&O Cruises this new ship is great news. Offering a range of ships, destinations and itineraries is an important part of the P&O Cruises success story and we believe that this addition will further our position as Britain’s favourite cruise line. I am sure that Adonia will soon become another much loved member of the P&O Cruises fleet. Adonia cruises will go on sale in the spring of next year and we look forward to sharing with you more about her and her itineraries over the coming months.