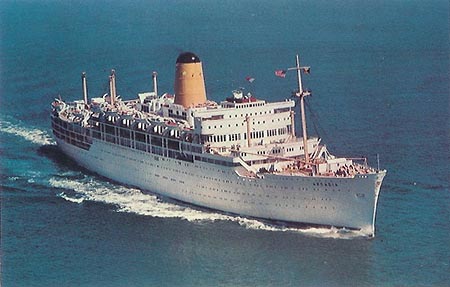 Following on from the nostalgia of Traditional Cruising that has surrounded the brand new Azura, I thought it was time to look at some of my old film footage again. This one shows my Mum cruising back in  1958, on the old old Arcadia (second one of four) Mum recalls having a suite for 23 Guinea’s. I think that translates to £23 and 23 shillings?!! I too went onto cruise onboard this Arcadia in the 1960’s and 1970’s. My last time onboard was in May 1975 on a short cruise to Amsterdam where we visited the Dutch Bulb fields.

I wasnt around in 1958 so can comment, but I do remeber the ship quite well. As you will see from the film footage, she wasnt the prettiest of ships and there is quite a bit of footage of her outside decks and superstructure. Dont ever state that Ventura and Azura are ugly again! But you cant argue that ships such as Arcadia were indeed real ships!

Arcadia was built by John Brown Shipyards in 1954 and had a refurb by Harland & Wolfe in Belfast in 1959. she was srapped in Taiwan in 1979.