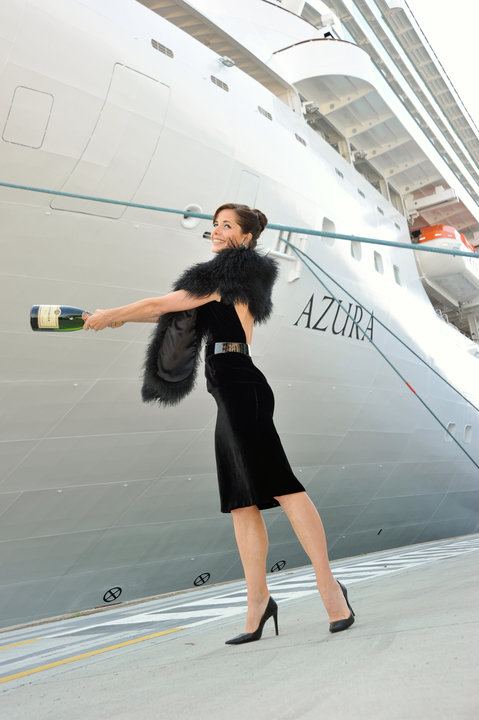 Widely considered to be one of the greatest ballerinas of all time, Miss Bussell danced in the “Girl Hunt” scene reminiscent of Cyd Charisse in Band Wagon and then twirled onto the top deck of the ship in a glittering red Jasper Conran evening dress.

Darcey Bussell said, “It’s a great honour to be involved as Azura’s godmother. For me this is a wonderful event because I am able promote the best of dance within one evening. It’s wonderful that P&O Cruises is carrying on that theme from the old films where dance was so important.”

P&O Cruises managing director, Carol Marlow said: “Darcey embodies glamour, vitality and classical elegance, which are also reflected in Azura. We are honoured that she has agreed to become Godmother. Azura has one of her three magnificent dance floors right at the heart of the ship, so with dancing a real feature, Darcey was a natural choice for Godmother and very fittingly will give Azura the best possible start in life.”

In keeping with Azura’s “back to the future” values, her naming ceremony was a departure from tradition yet captured the glamorous spirit of dance and romance. As well as Darcey’s customary champagne naming, the celebration encompassed a spectacular event with clips from the most memorable dance sequences in film history, on Azura’s new SeaScreen, along with a live dance show.