Its fair to say that the weather hadn’t been at its best for Flamin’ June, for the umpteenth time in a day I found myself changing my outfit yet again, wrapping up with layers to keep warm and waterproof coat in an attempt to stay dry. I left the hotel yet again and thinking to myself that the staff must think I have more changes of clothes than Superman! But wait a minute – where was the rain? Had it really finally stopped. Did it actually feel semi mild outside, or was that my fantastic clothes layering system. As I walked down the road I could see Queen Mary 2 just gliding along in front of me. She was moving up to the turning basin again ready to turn and come back down to join her sisters for the fireworks before they all departed on their respective voayges.

Yet again I was amazed to be able to select my vantage point from the railings with relative ease, and was happy with my viewing point right at the front of the railings overlooking the dock area. All three ships can only be described as stunning all light up, with the reflections glistening against the water below them. I could hear music clearly being played across the open deck of Queen Elizabeth and I so wished I was onboard. Queen Mary sailed elegantly down the river and greeted her sisters, and passengers and crew onboard each ship exchanged greetings and cheers. They all then sat patiently waiting for the fireworks on the opposite side of the river. 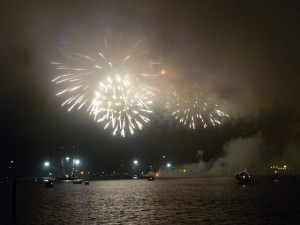 At around 10.30pm the bang of the first firework echoed around Southampton, red white and blue fireworks could just about be seen before they disappeared into the low cloud and mist. We were treated to about 20 minutes of fireworks and music which were responded to by the loud horn blasting of all three Cunard Queens. Southampton was not going to be able to sleep through that! I loved it. Again the crowds both ashore and onboard all three ships were cheering and singing. Flags were waving and still the horns kept blasting! 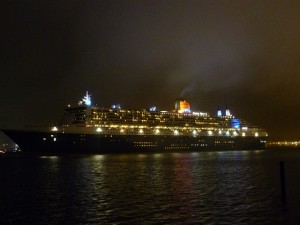 Queen Mary 2 then slowly started to edge closer to us ready to start her 5 night Summer Getaway voyage to Amsterdam, Bruges and Le Havre. But she didn’t go quietly – why would she?! This was a big proud day for her and she was going out all horns blasting. By the time she got down by Ocean Terminal Queen Victoria was slowly pulling out from infront of Queen Elizabeth and she too saluted her sister and the gathered crowds. There can’t have been a spare bit of railing on that ship as she slipped out and sailed past Mayflower Park, every balcony and deck was full of passengers and crew waving. Queen Victoria was heading down to the Central Mediterranean for a 17 night Adriatic Explorer voyage. I hope she finds the sunshine! 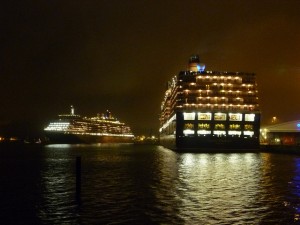 But, in my opinion, they saved the best until last. Queen Elizabeth let go her lines, gently pushed away from City terminal and then elegantly spun to bring her bow round to the port side and turn to face back out to sea. The Commodore and bridge officers made it look effortless. I have to admit there was a little lump in my throat as she slowly straightened up and started her journey for her Baltic Explorer voyage. Queen Elizabeth had the final word with a few final blasts on that horn and much cheering, music and singing coming from the decks. I dont think the party onboard ended there, but for me it bought to a close the end of a fantastically amazing day. It was the first time that all three Cunard Queens had been together and I had been lucky enough to be part of this momentous occasion which also helped celebrate HRH the Queens Diamond Jubilee.