Well, I think you may have grasped by now that I was in my element yesterday, being able to witness first hand,the full Cunard Three Queens experience. My day was 23 hrs from start to finish, and I would do it all again. Not even the rain could dampen my spirit – and there was a lot of rain in Southampton!

I’ve already posted, in my previous blog about the ships arrival, but I loved every freezing minute of the ships arrival. By the time I walked back to the hotel I could hardly feel my fingers and my toes were suffering with pins and needles for a good while after a soak in the bath. But I would do it all again at the drop of a hat. Ships are my thing, always has been and always will be.

By 9.30am I was ready to make my way to City Terminal for my day onboard Queen Elizabeth. A lot of very suntanned people were disembarking the ship after two sunny weeks in the Mediterranean, and what an arrival they had back in Southampton this morning! 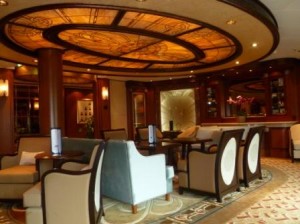 We were soon onboard and being given the full guided tour of what is my favourite Cunard Queen. I love the art deco, the traditionalness, the luxury and the ambience. I make no secret of the fact that I love the Grill Class of Cunard, I like that extra little edge that it has. The tranquillity and relaxed ambience of the Grill Lounge and the open dining and enhanced menu choices. But at the same time I love the Queens Room, Cafe Corinthia and of course the Commodore club – especially the Martini cocktails! I’m yet to do a sunshine voyage on Queen Elizabeth but I love both the pool areas, especially the aft lido pool with extensive deck area. Of course I also love the exclusive Grills Terrace, but it has always been winter when I have sailed Grills so am yet to have the benefit of those lovely luxurious padded sun loungers and dedicated waiter service.

During our tour we had to pass along one of the open decks in the rain. I was lucky as I had packed a brolly, so stayed relatively dry. One lady hadn’t stayed so dry, but as we stepped inside the spa area one of the spa staff offered the lady a towel to dry her leather coat – now that’s White Star service!

Pre lunch we were invited for champagne in the Yacht Club with a welcome speech by Amanda Reid, Entertainment Director. The champagne was very free flowing where I was sat and a very pleasant time was had chatting with other guests. 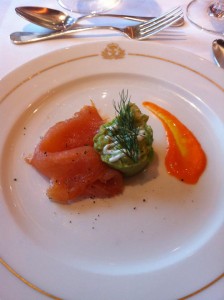 Time for lunch which was served in Britannia Restaurant, lower floor. We had a lovely table for 6 by the window, just a shame that the sunny Mediterranean wasn’t outside. Instead we had the very grey and gloomy building of City Terminal. The menu was presented as a lovely souvenir issue to celebrate HRH The Queens Diamond Jubilee, with the inside cover giving a history of the Queens connection to Cunard with colour photos. The back cover listed a brief summary of Cunard and British Royal Family. I started with Cured Loch Duart Scotish Salmon, Guacamole, Roasted Red pepper sauce Romesco. For main I had Grilled fillet steak, blue cheese potato mousseline, haricots verts, shallots with a vintage port wine glaze. Then, I somehow fitted in a Limoncello crème brulee. I was offered red wine to drink with my fillet steak, but I opted for the white. It was Cunards own label and very nice it was too. By the time I had coffe I was ready for a nap, but things to do, ships to sea. 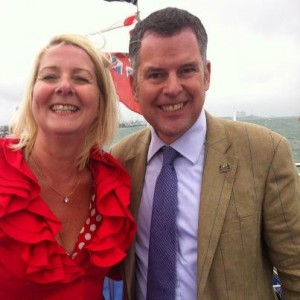 All too soon it was time to disembark Queen Elizabeth and board a coach to take us to Ocean Marina to go on a waterline tour of the three Cunard Queens. The rain was lashing down, sideways infact. And we had some time to kill before we were able to board the ferry. I had three options. Stand in the rain and get wet, try and squeeze into the already over packed cafe, or run for the bars of Ocean Village – I will leave you to make your own minds up regarding which option I went for. Again we were happily chatting away to anyone and everyone. My souvenir menu was drip drying on the bar and was attracting a lot of attention. People wanting to know about where we had been, how did we get invited, what is she like etc. Suddenly we realised we should have been at the other end of the pier some 5 minutes ago. Running in the pouring rain, with the wind against you and wearing high heals is not one of my strong points, especially when the feet have gone numb! I made it just intime and before I knew it the boat was on the move. Admittedly it wasn’t the best day for a boat trip, but we had a roof over our heads and steamed up window, and Cunards hospitality had been extended to complimentary drinks. I hear the Scruffy Dog was very nice!

It didn’t take me long to become totally disorientated, the steamed up windows didn’t help. But I had never done this before. I had never been in such a little boat in Southampton Water . When I eventually decided to brave the elements to get outside as we passed Queen Mary 2 at Ocean Terminal I could hardly recognise where we were in relation to Southampton. Mayflower Park looks totally different from that level. Of course I knew that Queen Elizabeth was in City Terminal and Queen Victoria was in Mayflower Terminal, but it was hard to get my bearings, even when I was stood up on top deck of the boat. Some had braved the bow of the boat for most of the journey, but there weren’t many on top deck, certainly not in that wind and rain. I’m sure I wasn’t looking my best for the press photographer! Next thing I knew I was being beckoned back downstairs to be interviewed for Cunard. Why me?! it would have been nice if the rain could have laid off for the water line tour so that the view of the ships could have been appreciated a lot more, but it wasn’t to be. 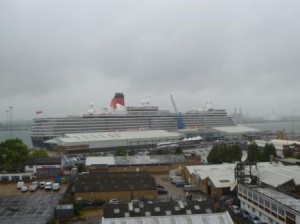 Next stop should have been Carnival House to view the Red Arrows fly past from the roof garden. We did actually make it to Carnival House, and even made it to the roof of Carnival House. But it was not the place to be in driving rain and what might be described as a bit of a gale blowing. We stood there for what seemed like ages, but it was becoming more obvious that the Red Arrows would not be able to fly despite them flying over Buckingham Palace an hour or so earlier. For me it didn’t spoil my day not seeing the Red Arrows. For me it was all about the Three Cunard Queens!

Back on the ground floor of Carnival House I somehow had to think about getting next door to West Quay Premier Inn. I had left my feet somewhere? They felt like they had been squeezed into Cinderella’s tiny glass slipper. They certainly weren’t functioning with my legs. It was a case of make the legs move and hope the feet made it as I limped next door to the hotel. I was clutching my precious Cunard goody bag, trying really hard to keep the brolly the right way out and actually doing the job it was designed for. My union jack flag got stuck onto a lamp post. HRH’s souvenir menu dropped in a puddle. Another union jack took flight, but I made sure the goodie bag was in the firm grip of my hand.

Next stop , big hot bath with very tingly feet and cold aching bones. Was it worth it? You bet it was!

Check back for the next update of the firework finale and the departure of the Three Cunard Queens from Southampton.