P&O Cruises is to change the livery of its ships with a bold new look which celebrates its heritage and its place as Britain’s favourite cruise company and the longest version of the Union Jack will adorn its new flagship, appropriately named Britannia.

For nearly two centuries P&O has exemplified Britain across the world, becoming the country’s greatest shipping company and part of its fabric.

Now, as P&O Cruises refreshes and re-energises its brand, the company is to update the livery of its fleet of ships to celebrate, more clearly, its British credentials.

From the end of this year, the company’s eight ships will begin to embrace on their bow a bold new Union Flag, styled in a contemporary way which looks to the future, while celebrating the past. The imagery will be sympathetic to the ships’ sweeping lines and enhance their presence in port or at sea. 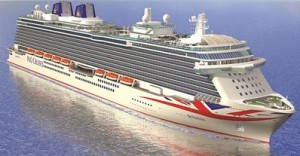 The ships will also have distinctive blue funnels carrying an illuminated rising sun motif which depicts the Oriental part of the Peninsular and Oriental (P&O) name on the company’s coat of arms.

The new livery was developed after extensive research among consumers. It will first be seen on P&O Cruises Aurora, after her drydock later this year, followed by Britannia at her launch in February 2015, and on all other P&O Cruises ships by the end of 2016. Britannia, the largest cruise ship exclusively for the British market, will display the longest version of the Union flag anywhere in the world, at 94 metres.

Chief executive officer David Dingle said: “In our 177th year we are unveiling a new, contemporarily styled livery which symbolises all that we stand for, pointing to the future and celebrating our British heritage. This bold new look will make our ships yet more distinctive and recognisable across the world.

“Our ships will proudly carry on their bow Britain’s most distinctive symbol, the Union Flag, to all corners of the globe. The P&O Cruises name will be emblazoned along their hulls and the Rising Sun, the enduring symbol of our heritage, will shine from their funnels. This modern new look will exemplify the strengths and virtues of our company long into the future.”

P&O Cruises’ roots stretch back to 1837, when the Peninsular & Oriental Steam Navigation Company was awarded the lucrative Admiralty contract to carry mail to the Iberian Peninsula and beyond. Soon afterwards* the concept of cruising was born, and P&O Cruises became synonymous with providing its customers with the highest quality of service at sea.

To see an animated version of the livery CLICK HERE