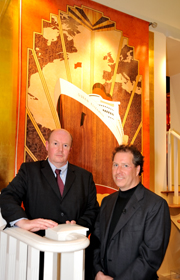 Queen Elizabeth joins the Cunard fleet in October 2010 as the sixth Cunard Queen in Cunard’s illustrious 170 years history and the second largest Cunarder ever built. She will be the third Cunard Queen to bear the name Elizabeth and will join her sisters Queen Mary 2 and Queen Victoria as part of the youngest fleet in the world. Her unique style and personality will bear tribute to her forebears Queen Elizabeth and QE2.

The arrival of a new Cunard Queen is an auspicious and remarkable occasion and Queen Elizabeth will be no exception. As ‘The World Awaits’ to meet our new Queen and to admire her elegance and grace you will receive regular bulletins heralding her arrival and to tell you more about what makes her so special and so very anticipated.

This is the first in that series of special ‘The World Awaits’ announcements.

Linley Artwork To Be A Major Feature On Queen Elizabeth

Cunard ships, while among the most modern afloat, are known for their traditional luxury, accentuated by extensive use of brass, classic fabrics, marble and highly polished woods.

One challenge for Queen Elizabeth’s designers was how to treat the significant central space on the sweeping staircase in the ship’s soaring Grand Lobby.

Cunard’s President and Managing Director, Peter Shanks, says: “We needed to fill that space with something which would not just be dramatic but which would also reflect our emphasis on traditional and sumptuous materials. After much thought and exploratory work, it was decided to commission a 5.6-metre (18 ft 6 in) high marquetry panel depicting the original Queen Elizabeth, an Art Deco icon, using a variety of natural woods from around the world.

“Once we had decided on the theme and the medium, it didn’t take us long to conclude that no-one was better qualified for this work than the company of the exceptional craftsman David Linley, whose creative ability and mastery of wood is renowned”.

As a result, Linley, a company specialising in the design and manufacture of fine furniture and marquetry was commissioned to design and make this stunning centrepiece at the heart of the ship. The magnificent artwork spans 2½ decks and shows the port bow of the original Queen Elizabeth seen dramatically from sea level. The piece is intricately executed using the technique of marquetry inlay in nine different types of wood veneers.